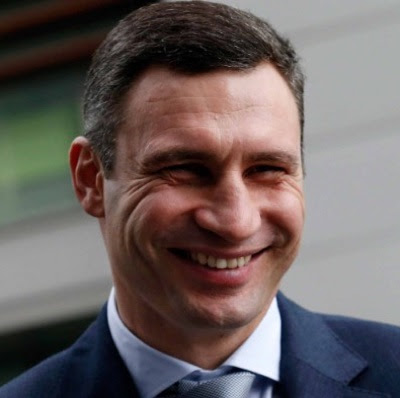 Vitali Klitschko, the chiseled, ex-boxing champion turned mayor of Kiev, is a busy man, on a whirlwind tour of meetings through major US cities.

After a year as mayor, he’s come to seek investments—and to reassure the world that the city he calls home is safe.

Courting international investment into Kiev, and the country more broadly, is a seemingly-innocuous act.

Yet, it’s also an act of defiance against an eastern neighbor upset about Ukraine’s increasing shift towards Europe, and, perhaps, a sign of Klitschko’s own not-too-dormant national ambitions.

Just a year ago, he floated running for president before stepping aside for Petro Poroshenko, and assuming the mayoral post instead.

He’s not shy about assigning blame for the war either, which Klitschko says would not be possible without the support and backing of the Russian government.

Like all Ukrainian politicians, he names ending the conflict as the top national priority—but emphasizes that, at its root, is the foreign aggression.

The conflict in Ukraine’s southeast has claimed more than 6,400 people since the war started more than a year ago.

It, like the Euromaidan uprising before it, is driven by a tension over Ukraine’s place in the world:

Russia, a powerful neighbor to the east, wanted the strategically-located country for its own economic spheres.

Other powerful forces within the country itself were set on taking steps towards entry into the European Union.

A year later, it’s easy to see what direction the country is heading. “Ukraine has huge potential,” Klitschko says, while admitting “some people [are] skeptical about investing in a country that’s at war.”

A year into his term, Klitschko has had a rocky start.

That’s partly why he refers again and again to Kiev’s potential (and, indeed, to that of the country as a whole) as he travels the world courting potential investors—trying to boost his city’s prospects.

The first step to attracting those investors, he says, was the subject of his year-one agenda: addressing corruption.

It’s something Klitschko touted heavily after his participation in the so-called “revolution of dignity” propelled him to the mayor’s job, fulfilling his long-held dream of gaining elected office.

(Though left unstated, it’s also a non-too-subtle jab at Putin’s Russia, where bribes are notoriously understood to be par for the course in doing business.)

“We make clear, transparent, and understandable rules” to draw investments, he says.

“We have some forces who are trying to destabilize Kiev, but we have everything under control.”

“We make our city government open,” he says, emphasizing that everyone—the media, activists—is invited to see the inner workings.

To further better governance, among the meetings Klitscho had in New York was one with former mayor Rudy Giuliani—a longtime pal who advised him on a previous, failed mayoral bid—about police and prosecutorial reforms, among other matters.

Klitschko called Giuliani “an example of a successful mayor.”

With Klitschko’s party also in control of the city council, the responsibility for change weighs heavily on him.

But the success of his reforms has yet to be determined; the city’s residents have more immediate concerns.

The first democratically elected Kiev mayor in two years cleared out Independence Square—or Maidan, the site of a mass uprising against the city’s old guard.

This, Klitschko now says, was the “most difficult task in my life,” and flowers and plaques remembering those killed still line the side streets around it.

Then the Ukrainian currency, the hryvnia, plummeted, hitting a rate of the low 30s to the U.S. dollar in February—compared with less than 13 the previous October, and less than 10 in February 2014.

It’s bounced back a bit, though residents of Ukraine’s capital city are still plagued by rising utility costs and an uncomfortable feeling of deprivation.

The economic woes mean that Klitschko’s anti-corruption record may only be judged once the city is fully out of the woods financially.

But the economic downturn, he says, may now make the city more attractive to foreign investors: The economy will surely perk back up, but the cost of entry now is lower than it’s ever been.

He pauses to think when asked about a five-year goal, and a hand wanders over his strong brow.

“Kiev will be a modern city, a modern European city,” he finally answers.

It will be a financial and industrial center, with vastly more visitors, he says.

Remnants of old industrial sites will be demolished, with factories relegated to the outskirts of the city.

Ever on message, he adds that this will only be possible with continued support from the West—investors, and organizations such as the International Monetary Fund.

“We don’t want [to go] back to the U.S.S.R.,” he says, grumbling about Vladimir Putin’s plans to recreate a Soviet empire.

“We want to be part of the modern world, the European family.”

Though Klitschko has no plans to return to boxing, lessons he learned from the sport seem to influence his approach to governance, too.

“And I showed my skills, I was world champion... I have nothing to win [in boxing] anymore.”

The sense Klitschko gives, instead, is that restoring order and financial stability to Ukraine is his next arena to conquer.

His plans—which include the agricultural potential of vast swaths of Ukraine, as well as harnessing the well-educated population—are nationwide in scope, despite his current championing of decentralization.

After the larger battle for peace and prosperity, it seems almost certain that Klitschko will aim to reach the heights of national politics.

“I know better than anyone: Without fight, no win,” he says. “And we’re fighting for our vision, for our dreams, for our future.”