UniCredit Group, with a current market capitalization of approximately €84 billion (1 October 2007, is ranked among the top financial groups in Europe. UniCredit has a presence in 22 countries, with over 40 million clients and 9,000 branches, approximately 170,000 employees and total assets of approximately €1,018 billion (proforma) as at 30 June 2007.

Through the merger with Capitalia, effective as of 1 October 2007, UniCredit has significantly strengthen its presence in Italy which is one of its core markets alongside Germany, Austria and CEE.In the CEE region, UniCredit operates the largest international banking network with over 3,700 branches and outlets, where more than 76,000 employees serve approximately 27 million customers.

UniCredit Group has been working in Ukrainian market since 1997. In this very year, Pekao Bank (Ukraine) was opened in Lutsk (the first bank in Ukraine with 100% Polish capital).

In June 2006 Pekao Bank (Ukraine) changed its name to UniCredit Bank according to Strategy of business development of UniCredit Group in Ukraine.

In September 2007 UniCredit Bank has successfully completed the merger with HVB Bank Ukraine according to Strategy of integration of UniCredit Group in CEE.

UniCredit Bank has become the universal bank that offers wide range of high-quality services and products to clients of corporate and retail businesses.

UniCredit Bank is both our personal and corporate bank and we highly recommend it for all your banking needs. Shown on the map below are the branch locations in Ukraine. 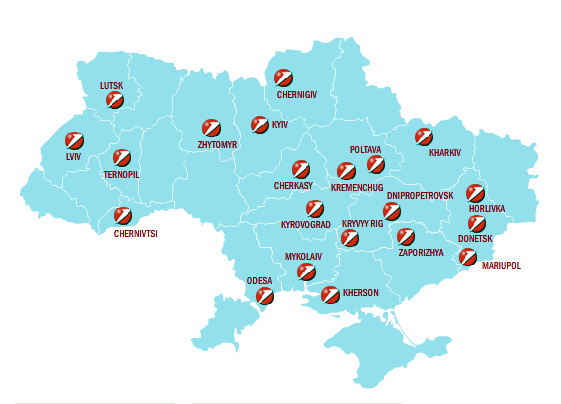