The accident at the Chernobyl nuclear power plant in the Ukrainian republic of the Union of Soviet Socialist Republics (USSR) that produced a plume of radioactive debris that drifted over parts of the western Soviet Union, Eastern Europe, and Scandinavia, took place on April 26, 1986, and was the worst nuclear power accident in history.

Large areas of the Ukrainian, Belorussian, and Russian republics of the Soviet Union were contaminated, resulting in the evacuation and resettlement of roughly 200,000 people. The accident raised concerns about the safety of the Soviet nuclear power industry, slowing its expansion for a number of years, while forcing the Soviet government to become less secretive. The now independent countries of Ukraine and Belarus have been burdened with continuing and substantial costs for decontamination and health care because of the Chernobyl accident.

The Chernobyl nuclear power station was one of the largest in the Soviet Union. It was located just outside of the town of Pripyat', about 18 km (11 mi) northwest of the town of Chernobyl. The plant was only 16 km (10 mi) from the border between the Ukrainian and Belorussian republics and roughly 110 km (70 mi) north of Kiev, the capital and largest city of Ukraine.

Construction of the plant began in the 1970s, with reactor No. 1 commissioned in 1977, followed by No. 2 (1978), No. 3 (1981), and No. 4 (1983). Each reactor had an electricity-generating capacity of 1,000 megawatts, and the four together produced about 10 percent of Ukraine's electricity at the time of the accident. Two more reactors, were under construction at the time of the accident.

In the early morning hours of April 26, 1986, reactor No. 4 was operating at very low capacity (6 to 7 percent) during a planned shutdown. Plant personnel intended to monitor the performance of turbine generators, which supplied electric power for the plant's own operation, during a changeover from standard to a backup source of power. The reactor's design made it unstable at low power, and the operators were careless about safety precautions during the test. 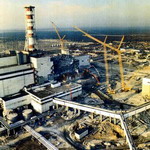 After a sudden power surge, two explosions destroyed the reactor core and blasted a large hole in the roof of the reactor building. Radioactive debris moved up through this hole to heights of 1 km (0.6 mi), carried by a strong updraft. Fires caused by the explosion and the heat of the reactor core fed the updraft.

An estimated 100 to 150 million curies of radiation, primarily radioactive isotopes of iodine and cesium, escaped into the atmosphere before cleanup crews were able to bring the fires under control and stabilize the situation some two weeks later. Initially, prevailing winds carried the radioactivity northwest from the plant across Belorussia and into Poland and Sweden, where heightened radiation levels detected on April 28 first brought the accident to the world's attention. Subsequently, from May 1 to 5, wind patterns shifted so that the bulk of radioactivity was carried more directly north over Belorussia and southwestern Russia.

After the explosion, firefighters and other workers arrived on the scene in an attempt to contain the blast. To reduce emissions, the team bombarded the reactor with 5,000 metric tons of shielding material consisting of lead, boron, sand, and clay. A second concrete foundation was constructed under the reactor to prevent contamination of groundwater.

Finally, workers erected an enormous concrete-and-steel shell or “sarcophagus” over the damaged reactor to prevent radioactive materials, including gases and dust, from escaping. Initially, Soviet officials placed the death toll at 2, but by mid-August revised the figure to 31, reflecting deaths of workers from acute radiation exposure during the cleanup.

By mid-July, roughly three months after the accident, containment and cleanup had proceeded to the point where the plant's management had moved back into the administration building just 300 m (1,000 ft) from the No. 4 reactor. In addition to reducing the radiation threat, a key objective to the cleanup effort was resumption of electric power generation at Chernobyl before the onset of winter. The No. 1 and No. 2 reactors, in fact, were returned to service in November 1986 and the slightly damaged No. 3 unit was restarted in December 1987.

More than 100,000 people were evacuated during the first few weeks after the accident. Evacuation of Pripyat', where 35,000 people lived at the time of the accident, and the immediate surrounding area began roughly 36 hours after the accident, on the afternoon of April 27. Evacuation within a larger, officially designated evacuation zone of 2800 km2 (1100 mi2), including parts of Belorussia began on May 3. That area became known as the "30-km zone" because it is a circle with a 30-km (19-mi) radius from Pripyat'. At least 50,000 people were relocated in Ukraine and 25,000 in Belorussia during this second-stage evacuation, which continued into June.

As officials, especially in Belorussia, determined that areas of serious contamination extended well beyond the official evacuation zone, additional people were relocated. Fifty thousand people were evacuated from areas outside the 30-km zone in Belorussia in 1986 and 1987, over 30,000 more between 1991 and 1993, and roughly 50,000 in Ukraine over the period from 1991 to 1996. The total number of people evacuated in Ukraine and Belorussia now appears to exceed 200,000.

The principal environmental effect of the Chernobyl accident has been the accumulation of radioactive fallout in the upper layers of soil, where it has destroyed important farmland. The second most important impact has been the threat to surface water and groundwater.

The cleanup in some of the most heavily contaminated areas within the evacuation zone, such as Pripyat', involved the stripping and burying of topsoil and vegetation, the sealing of wells, and the building of structures designed to prevent surface water from entering streams and rivers that drain into the Dnieper River system, which provides Kiev's water supply.

By most measures, the country most seriously affected by the accident is Belarus, which changed its name from Belorussia after it, along with the other Soviet republics, became independent with the collapse of the Soviet Union in 1991.

Almost 20 percent of the republic's farmland was removed from production during the years immediately after the accident. Half of the vast 27,850-km2 (10,750-mi2) area described as being "seriously contaminated" by radiation, with levels of radioactive cesium in topsoil exceeding 5 curies, is in Belarus. The regions commonly identified as experiencing the greatest contamination include the oblasts (regions) of Homyel', Mahilyow, and Brest in southern and eastern Belarus; Kiev, Zhytomyr, and Chernihiv in northern Ukraine; and Bryansk in southwestern Russia.

Effects on public health have been more difficult to determine and are subject to considerable controversy. It is not always clear which health problems are caused directly by radiation and which are caused by poor nutrition, the general low level of health, and anxiety and stress produced by fear of radiation exposure. These issues surround the debate over the causes of higher death rates among the more than half a million workers who participated in the Chernobyl cleanup.

However, at least one type of cancer can be attributed directly to Chernobyl. There has been a significant rise in the incidence of thyroid cancer among children in the areas where radiation levels are highest. Thyroid cancer rates in Homyel' Oblast, for example, increased 22-fold from 1986 through 1990 compared to the period from 1981 to 1985.

Many have argued that the accident at Chernobyl accelerated the transformation of the Soviet Union toward a more open society. Soviet officials, unable to conceal the accident from the world, reluctantly acknowledged the accident during an evening news telecast in Moscow on April 28 and in brief newspaper accounts on April 30.

This was followed by regular coverage focused on the cleanup efforts in the months that followed. This reporting sharply contrasts to the lack of coverage of previous catastrophic events, an accident at a nuclear weapons plant in the Ural Mountains in 1957 and major earthquakes in Central Asia in 1948 and 1964.

Also, after the accident several key officials in the Soviet nuclear power industry were dismissed, punished, or both, and a new Ministry of Nuclear Power was created in 1986. Before then, officials in the general electrical power ministry had overseen nuclear power. Chernobyl also called into question the basic safety of nuclear power in both the USSR and in several Eastern European countries whose power plants contained reactors based on the RBMK reactor design used at Chernobyl. 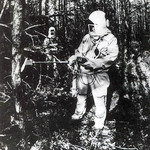 In the RBMK design, there is no containment shell, the graphite blocks used to moderate the fission reaction are flammable, and excess steam in the reactor core will cause the nuclear reaction to increase. As a consequence, international organizations, such as the International Atomic Energy Agency, became involved in programs to improve safety procedures and upgrade the design of RBMK reactors in the USSR and Eastern Europe.

The accident, coupled with a general economic decline that set in during the final years of the USSR, also resulted in a dramatic scaling back of Soviet plans to use nuclear power to generate the bulk of electrical power in Soviet regions remote from oil and gas energy resources.

In Ukraine, opposition to further nuclear construction in the immediate post-Chernobyl years was particularly intense. In August 1990, for example, the Ukrainian parliament declared a moratorium on nuclear power plant construction. This ban was subsequently lifted in 1993 because of severe energy shortages in Ukraine.

Earlier in 1990 the Ukrainian parliament had voted to close the Chernobyl plant permanently within five years, but closure was repeatedly postponed because of the country's shortage of electricity-generating capacity. After a turbine fire in October 1991, the No. 2 reactor at Chernobyl was shut down, leaving only two of the original four reactors at the plant in service.

Reflecting mounting safety concerns in the international community, an agreement was concluded in April 1996 between the Ukrainian government and the G-7 countries, Group of Seven major industrial nations, to decommission the Chernobyl plant by the year 2000. In conjunction with the agreement, the G-7 countries pledged $300 million to finance programs to strengthen the sarcophagus, which some fear may collapse, and for additional cleanup work.

In November 1996, as part of the schedule for the decommissioning, the No.1 reactor at Chernobyl was taken out of service, leaving only the third unit operational. Early in 2000 the Ukrainian parliament reaffirmed that the plant would be totally shut down by the beginning of the year 2001. It was finally shutdown on December 15, 2000.